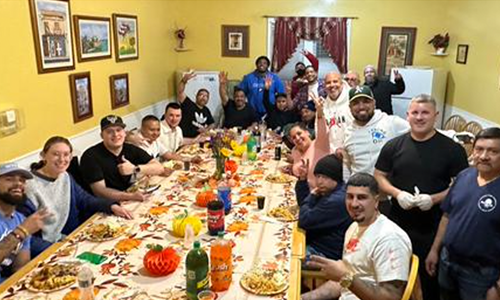 28 Dec UWCM gets $5M gift: Here is its impact on Worcester

The gift was “transformational,” United Way of Central Massachusetts CEO Tim Garvin said, “in the size and magnitude.”

It started two years ago on Nov. 16, 2020. An email appeared in Garvin’s inbox from someone who supported “the efforts of a philanthropist who is interested in contributing to United Way of Central Massachusetts.”

Then on Dec. 15, 2020, philanthropist MacKenzie Scott delivered a slate of contributions going out to 384 nonprofit organizations. Among them was United Way of Central Massachusetts, which received $5 million of unrestricted funding.

They did not apply or ask for the contribution, Garvin said, adding that receiving it was “better than Christmas and your birthday and Hanukkah all rolled into one.” Having the money meant United Way could “be creative and innovative” in helping the community, Garvin said.

Garvin shared the news with the board of directors, which agreed to focus on amplifying youth development and early education, reducing poverty and strengthening diversity, equity and inclusion.

“We are stewards of the money that people give to us,” Garvin said to MassLive. “So we are very conscious that we have to have [the] highest and best use. We can take fewer risks. This allowed us to say, ‘We can try things we’ve never done, we can invest in things that are new that might not make it, but that’s OK.’”

The initial payment the board voted on was to continue supporting the Worcester Remote Learning Hub Collaborative with $500,000. Those funds set up 95 classrooms and served 1,300 children and their families, Garvin said. United Way then added another $800,000 after fundraising with local family foundations.

Of the $5 million Scott gave to United Way, over $3 million was split for over 90 organizations and entities in Worcester. For example, $1 million was allocated as part of the Worcester Community Challenge to 14 organizations. Recipients received between $30,000 and $10,000.

Three young interns from the Nipmuc community were hired by the library thanks to the grant, according to Nan Wolverton, vice president for academic and public programs. The goal was to establish pathways for Nipmuc youth to acquire library and digitalization skills for six months, and eventually practice this with their own tribal archives.

“Another goal of the internship program was to allow for improved and more equitable access to rare and important archival sources,” Wolverton said in an email. “The interns were exposed to the daily operations of working within an archive, including providing regular assistance in the Readers’ Services Department. One intern even curated an exhibition in the Reading Room on women’s needlework.”

Besides bringing the society closer to young people interested in library work, Wolverton said the program helped continue a dialogue with the Nipmuc tribal community. She noted the American Antiquarian Society is built on the Nipmuc’s ancestral homelands.

Director of Operations Deondre Carr said the grant helped to elevate the salaries for job trainees and hire more clinicians who speak Spanish. Over time, recovery completion periods and job training graduations started to go up.

“That funding helped us be able to open our vision and see where are the next steps for Latin American Health Alliance,” Carr said.

While there’s still a waiting list to apply, the funding could lead to more facilities and another cafe down the line. Carr called Garvin a beautiful person, someone who “fights for our community in the way that he fights just in general for anything he believes in.”

“One thing I can say is Tim Garvin is a role model to this community, he’s a role model to me,” he added. “Anything that we ever need literally you can text him, call him anything of that sort. He’s always reliable, he’s always there. He really cares for the community.”

Following the Unites States’ withdrawal from Afghanistan, United Way put forth $900,000 into helping several organizations that supported 600 refugees, including Ascentria Care Alliances. Chief Community Services Officer Aimee Mitchell recalls seeing Garvin, along with Worcester Mayor Joseph Petty and several others, at meetings for the Worcester Together Refugee Response being asked how they can help.

“What so few people remember is that when the Afghan crisis began and folks were arriving to the United States to these various military bases, there was no money to support them,” Mitchell said. “They weren’t eligible for benefits because of their status. The various federal state agencies said, ‘We’re going to have to wait and see what happens.’ But there was United Way.”

Ascentria built 50 neighborhood support teams comprised of volunteers to raise money helping refugees. In turn, Ascentria matched how much those groups raised with the grant money. United Way helped to respond with how to pay for hotels for people arriving in the United States in the midst of a housing crisis.

When financial help was necessary, Mitchell knew she could go to Garvin, who would stand by to ask “what do you need?” followed by a prompt plan of action. “It’s probably a little combination of the awesomeness of Tim and the MacKenzie Scott money, right?” Mitchell said. “I think that Worcester was able to uniquely leverage United Way and who they are into (making) spectacular relationships.”

During the Worcester Homecoming that celebrated the city’s tercentennial in June, Garvin recalled stopping by the AC Hotel where it was held and was thanked by the manager. Some of the refugees who came to Worcester were employed at the hotel.

“Not only did it allow the Afghan arrivals to feel a sense of purpose by finding jobs, it helped our economy and city continue to move forward,” Garvin said. “It was just a great story.”

Grants were also split with $500,000 going to youth summer programs like the Boys and Girls Club and EcoTarium. During the infant formula shortage, $65,000 went to purchasing some formula while also going to places like the El Buen Samaritano Food Program and the Family Resource Center. Following the roof collapse at Mill Street Apartments, $10,000 went to sponsoring hotel rooms for the 110 people who were displaced, Garvin said. With roughly $2 million leftover, Garvin reflected that the grant allowed United Way to go from a funding cycle to responding immediately to someone’s aid.

“Years and years ago, I heard one of my United Way colleagues say, ‘The United Way is the gap-funding. What the government doesn’t do and what the private sector doesn’t do, we fill that gap,’ and I thought that that makes a lot of sense,” he said. “Probably through COVID and especially with this MacKenzie Scott gift, I now dismiss that. We aren’t gap funding, we’re the lead funder.”

Known for connecting people with organizations helping the community, specifically through its Holiday Wish Lists, Garvin said the grant amplified United Way’s impact on the community. “The speed, coupled with the strategy, has allowed us to make a significant difference, and I would hope should MacKenzie Scott ever want an example of how her gift was used to better a community, I hope Worcester would be seen as that example,” he said.