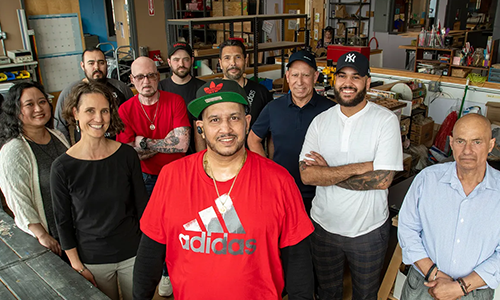 When Elmo Quiles was a kid, he would often make wooden toy cars for fun. Now, years later as a member of a Worcester makerspace, he loves to spend time in the woodshop creating similar cars through a unique program, Hector Reyes x Technocopia.

Technocopia, a nonprofit that offers common workspace and tools for artisans, and the Hector Reyes House, a residential substance use treatment facility in Worcester for Latino men, recently joined forces for a successful pilot program that provides hands-on learning in various trades. Funded by a grant from United Way, the partnership allows men from the Hector Reyes House to spend time at the Technocopia workshops, taking training classes and allowing them to eventually become full members of the makerspace if they choose to do so.

“This is where I come and create stuff, and I feel proud doing it,” said Quiles, whose favorite space in Technocopia is the woodshop. “The people are like a family. I feel free physically and mentally. As soon as I walk in here, I want to create something.”

The partnership has been running since March, although the idea has been in development since late last year, according to Frankie D. Franco, who recently graduated from Clark University with a master’s degree in community development and planning and who serves as the program’s community liaison. A former intern and now a member of Technocopia, Franco was familiar with both the makerspace and also with the Hector Reyes House, where his father had lived. When visiting his dad, Franco would talk to the other men as well, and they often said they had idle time. Franco knew there had to be a way to fill that time with something productive.

That led to conversations with Technocopia co-founder and board chair Lauren Monroe, who is currently serving as the program director, and then to Hector Reyes House officials. After speaking to some of the men at the house to see if the program would interest them, Franco and Monroe decided to officially pursue applying for a grant from the United Way Community Creative Challenge by producing a 90-second video.

The idea gained momentum over the winter months when Franco and Monroe visited the Hector Reyes House to talk more about the Technocopia mission and benefits, engaged them in a project making customized wooden boxes, and asked them to complete surveys about their interests. The information was helpful for all parties because, Monroe said, not everyone knows about the existence of makerspaces and what can be done with them. “They wouldn’t have known they had this resource less than a mile from the house,” she said of the men at Hector Reyes.

After an in-person presentation for the grant during a second round, the plan received funding and initially began with 12 men who live at the Hector Reyes House or its two sober houses. They were able to participate in various Technocopia trainings on the different machines and workshops available at the makerspace, such as metal and wood working, digital fabrication, textiles, basic computer skills and 3D printing. Through the grant, the men also receive a stipend for participating in the program, and while some have tried a little bit of everything, others have found they enjoy a particular skill set. Recently, the men worked together to build wooden frames for large-scale marionettes that were used by the Guardians of Traditions in the June 11 Worcester Tercentennial parade.

“We know a lot of skills to run these machines are excellent 21st-century skills,” Monroe said. “Our goal was to introduce the skills and let them find their own way. Anything you learn here is going to be good for the workspace.”

Not only does the program provide the men with necessary skills, but first and foremost, it also aims to help them with their recovery, Monroe said.

“They love coming here. They like to get out of the house,” Franco said. “To find a community of creators, that’s important for them. This replaces one community with another community.”

Franco said that oftentimes people struggling with addiction are viewed as only that – addicts – but they are, in fact, more: They can be makers, fathers, members of the Worcester community. “It’s been a beautiful experience watching them come in all happy,” he said of them men from Hector Reyes. “Every time we see each other, it’s all hugs. That’s the family component. We get to see the different layers. There are so many pieces to us, to our identities. They just breathe here. They can exist here.”

For Franco’s father, Frankie Franco Sr., that component has been extremely important. Currently a resident of one of the Hector Reyes sober houses, Franco Sr. enjoys coming to Technocopia because contributing to something positive gives him a better outlook about life and himself, and it helps clear his mind before heading back to the house, he said.

(Edgar Ortiz shows the flower he made in the metal shop. Rick Cinclair / Telegram & Gazette)

“I know it’s helping my fellow members and other addicts. It nourishes your soul, mind and spirit. I’m glad the Latino community has an outlet like this. It’s very important,” said Franco Sr., who likes to work with vinyl and iron-on graphics.

Franco Sr. himself has been an integral part of the program — he helped with the development but also serves as a translator at Technocopia. That has been an important component of the partnership and to Technocopia overall because, Monroe said, “we haven’t had a lot of Spanish-speaking resources. This has been an opportunity for us to address that gap, so we can better serve the people who live in our neighborhood.”

Of the 12 men who initially started the program, five have completed it and are now full Technocopia members, meaning they can come and work when they’d like, instead of set hours. For Jimmy Rivera, who has been living at the sober house for about three months after six months at the Hector Reyes House, it’s an opportunity for which he is grateful.

“I’m in recovery, so it’s part of my recovery. It helps me talk to people, socialize. It helps me get back into the swing of things,” said Rivera, who likes to make his own T-shirts when he’s at Technocopia. “I come here and do my projects, and everything seems to go away. The problem is still there, but while I’m here, I usually come up with a solution.”

The grant is for a year, and Technocopia is currently seeking opportunities to bring in a new cohort of men. They also would like to explore setting up a workspace in the Hector Reyes House so that the program participants can create there as well.

“We want to continue this program,” Monroe said. “We want men who are part of this program to act as mentors.”

In addition, she said, “we’re hoping to create partnerships with corporations for paid internships, so that from here we can recommend men who are ready for that.”

Franco Sr. said that without the Technocopia partnership, he doesn’t think he would be where he is today. “I wish there were more programs like this to help the Latino community and addicts in their recovery. It will hep and transform their lives, but it will also give them a positive goal. The thing is to always have a goal in front of you.”