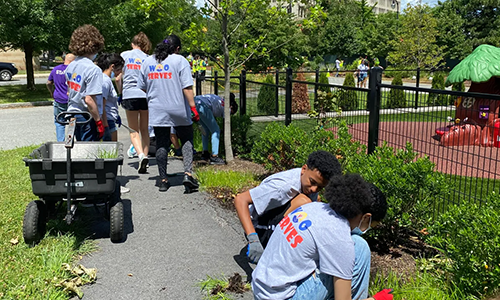 The New England Botanic Garden at Tower Hill has long been a place for Worcester residents to get back in touch with nature, but over the last couple of years, the NEBG has been working so that Worcesterites can get a dose of green right in their own neighborhood.

“There are clear social and emotional benefits to having more greenery in the city,” said Amy Nyman, horticulture outreach manager at NEBG in Boylston. “Research has shown that it impacts mental health in a positive way.”

With the help of local volunteers, NEBG staff have been planting gardens of local flowers and other plants on islands at intersections and alongside sidewalks, creating pockets of green throughout the city. The most recent project was a street median on Franklin Street in front of the YWCA July 6, in cooperation with WooServes Summer Youth Service Institute.

“It was a lot of fun because you saw the difference that you were making,” said student Alia Haytham, 17.

Alongside garden staff, the 28 students planted over 60 plants made up of species specifically picked by the NEBG specialists to promote biodiversity for both flora and fauna.

“They really seemed to enjoy seeing the impact they were having on the community through the act of planting, weeding and clearing off litter,” said Idaliana Medina, community engagement manager for the United Way of Central Massachusetts.

WooServes is a six-week part-time program that is part of the United Way of Central Massachusetts, with the July 6 project serving as the orientation and kick-off, explained Medina. Students between 13 and 17 from Worcester high schools as well as Shrewsbury and Millbury, sign up to work on community improvement projects focusing around health, access to outdoor recreation, youth education, emergency response and food insecurity, she said. The program also lets the students make connections with the wider community outside of their towns and schools.

“I met so many people whose stories I wouldn’t have known if I hadn’t joined the program,” said Haytham.

For each project, WoosServes partners with various local organizations — this year for the first time with NEBG.

Other green spaces maintained by the NEBG include the Lincoln Street rotary and sidewalk planters in Main South. Beyond mental health, these plants also provide important environmental benefits for both human and animal residents of the city.

“Cities tend to be heat islands,” explained Nyman, referring to how heavily developed locations become artificially hotter than the surrounding areas. Impervious surfaces such as concrete and asphalt absorb heat during the day, “and make the city hotter and the heat last longer,” she said.

Intermittent pockets of green can counteract it and have a cooling effect, benefitting overall community health. Additionally, these same impervious surfaces, as their name suggests, cause stormwater runoff that can lead to flooding. Areas of soil can instead absorb the water safely. These areas also act as habitats for various pollinator species of insects and birds, which are integral to a healthy ecosystem. The Franklin Street median project was not designed with the specific purpose of being a pollinator garden, said Liz Nye, public relations manager for NEBG, “but it functions as one, as the plants we chose would be the same ones we’d pick if designing a pollinator garden.”

Franklin Street isn’t the only environmental undertaking for the youth at WooServes during the program. Medina said that they would be at Broad Meadow Brook this summer as well to do similar work to maintain the trails.

“These students are real dedicated to improving the community that they live in,” said Medina. “This is only our second official week and they’ve already done a lot. They’re really motivated.”